To use technology as a hub to disseminate information, educating society about issues that matter most.

To create an online social, economic, and environmental resource initiative.​ 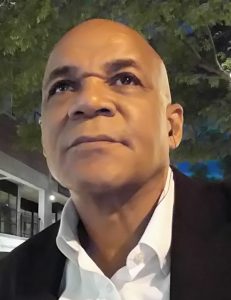 Stanley B. Wardsworth is me…I classify myself as a serial social enterprise entrepreneur and advocate of, as John Lewis stated, ‘doing the right thing for social justice’. In this bio I’d like to share a personal bit about me to put things into perspective

Growing up in New Britain CT. during the sixties, one of my earliest memories is my mothers’ dedicated interest in the social issues of this country during that period. As a Program Director of the local OEO Office – Office of Economic Opportunity – for many of my young formative years I witnessed her relentless interest for and pursuit of advocating for the disenfranchised and underserved communities; that experience eventually started my train to begin slowly rolling down the tracks!

Due to my lack of attention to doing what is right and affinity for the streets, my parents suggested a stint in the service to help me become more disciplined and focused. After a 6-month Army stint (yes, I said it), I returned home simply to pick up where I left off: on steroids. After a couple of factory jobs, I decided that the streets were the place for me. During a few short years in the late seventies/ early eighties, I began a national spree of crime that landed me a 20-year sentence – of which I spent 7yrs 3 mos. – in the Alabama penal system; essentially most of my twenties. In April 1988, a few months before my thirtieth birthday I was awarded release and given a cheap new suit, a Greyhound Bus ticket, and fifty dollars to return to CT.

Having returned to the north, after all those yrs. separated from society, I was off like a rocket. (My saving grace was though I only had an official 8th grade education, I voraciously read every non-fiction educational work I could find while doing my time.) After over seven years of having witnessed inmate’s indifference to the implications of their lives being on hold for such long periods of time, I left the penal system armed with a A) a desire never to return, and B) a command of reading, and a newfound desire to advocate for the social injustices that cause so many minorities of the United States to fail and/or become incarcerated. After moving to Boston, MA in 1989, having children and getting married, me and my family moved to Georgia in 2003. A few years earlier I had committed to a life with the Lord, once we arrived in GA my spiritual experience intensified.

In 2006, committed to satisfy my theological curiosity, I increasingly became interested in learning truth. (Curiosity may have killed the cat, but satisfaction brought him back!) In the span of five years, I obtained a seminary degree in Sacred Literature and faithfully spent a total of two and a half years between Nevada and Arizona to determine if the Lord would have those territories be a place for my family and me to start an education reform social program. Needing skills to anchor my quest for social work, in 2007 I attended a weeklong workshop on building the infrastructure of a non-profit from Dr. Tony Evans at Oakcliff Bible Fellowship in Dallas, TX. Learning some of the basic intricacies of managing a non-profit business only further fueled my passion for greater endeavors.

2011 was a year of on-the-job training: building a nonprofit business whose focus was education reform, providing concentrated attention to not only the academic but the social needs of the youth in the program. With passion, hope, and a dream, in 2011 Ezra Project Inc. was incorporated and the education reform program began in Atlanta. Since then I’ve worked with the Georgia Center for Opportunity Prisoner Reentry Program, the Atlanta CARES Program, Atlanta Public School System, Georgia Institute of Technology, Atlanta Chapter Urban League, among others. Almost simultaneously, during those years I’ve studied Urban Leadership at the Harvard Kennedy School, Injury Prevention at Emory University, and earned a certificate from  The Grant Institute Professional Grant Writing and Research Course at Troy University @ Montgomery.

Currently, my focus is arguably on the two biggest endeavors of my life: 1) the rapid and unbiased distribution of social news events that affect the nation. We are in the process of developing the Stan Wardsworth brand as the foundation to house our developing channel The Dogma Podcast.

The podcast is being designed to be an online audio/video network where interview and commentary segments of provocative issues will be discussed from a dogmatic perspective, and 2) the writing of a book entitled Stan…a man called Christian, an autobiographical graphic account of my personal Christian walk. The vision for the book is to provide a [for me] frighteningly truthful account of what that looked – and looks – like from the inside out, written in such a way as to positively encourage others during the intricacies of their own Christian lives. Your prayers are welcome!

Stanley B. Wardsworth is me…